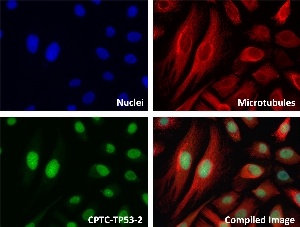 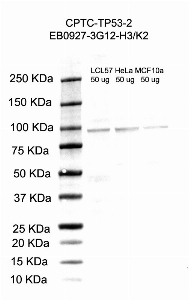 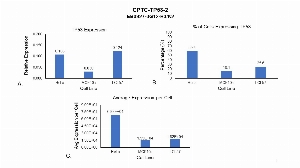 Single cell western blot using CPTC-TP53-2 as a primary antibody against cell lysates. Relative expression of total TP53 in HeLa, MCF10A, and LCL57 cells (A). Percentage of cells that express TP53 (B). Average expression of TP53 protein per cell (C). All data is normalized to β-tubulin expression.

This gene encodes a tumor suppressor protein containing transcriptional activation, DNA binding, and oligomerization domains. The encoded protein responds to diverse cellular stresses to regulate expression of target genes, thereby inducing cell cycle arrest, apoptosis, senescence, DNA repair, or changes in metabolism. Mutations in this gene are associated with a variety of human cancers, including hereditary cancers such as Li-Fraumeni syndrome. Alternative splicing of this gene and the use of alternate promoters result in multiple transcript variants and isoforms. Additional isoforms have also been shown to result from the use of alternate translation initiation codons from identical transcript variants.TP53 mutations are universal across cancer types. The loss of a tumor suppressor is most often through large deleterious events, such as frameshift mutations, or premature stop codons. In TP53 however, many of the observed mutations in cancer are found to be single nucleotide missense variants. These variants are broadly distributed throughout the gene, but with the majority localizing in the DNA binding domain. There is no single hotspot in the DNA binding domain, but a majority of mutations occur in amino acid positions 175, 245, 248, 273, and 282 (NM_000546) (Olivier et al., 2010). To fulfill its proper biological function four TP53 polypeptides must form a tetramer which functions as a transcription factor, therefore even if one out of four polypeptides has inactivating mutation it may lead to dominant negative phenotype of variable degree. While a large proportion of cancer genomics research is focused on somatic variants, TP53 is also of note in the germline. Germline TP53 mutations are the hallmark of Li-Fraumeni syndrome, and many (both germline and somatic) variants have been found to have a prognostic impact on patient outcomes. The significance of many polymorphisms for susceptibility and prognosis of disease is still very much up for debate.TP53 (Tumor Protein P53) is a Protein Coding gene. Diseases associated with TP53 include Li-Fraumeni Syndrome and Osteogenic Sarcoma. Among its related pathways are Gastric cancer and RET signaling. Gene Ontology (GO) annotations related to this gene include DNA-binding transcription factor activity and protein heterodimerization activity. An important paralog of this gene is TP73.Acts as a tumor suppressor in many tumor types; induces growth arrest or apoptosis depending on the physiological circumstances and cell type. Involved in cell cycle regulation as a trans-activator that acts to negatively regulate cell division by controlling a set of genes required for this process. One of the activated genes is an inhibitor of cyclin-dependent kinases. Apoptosis induction seems to be mediated either by stimulation of BAX and FAS antigen expression, or by repression of Bcl-2 expression. In cooperation with mitochondrial PPIF is involved in activating oxidative stress-induced necrosis; the function is largely independent of transcription. Induces the transcription of long intergenic non-coding RNA p21 (lincRNA-p21) and lincRNA-Mkln1. LincRNA-p21 participates in TP53-dependent transcriptional repression leading to apoptosis and seems to have an effect on cell-cycle regulation. Implicated in Notch signaling cross-over. Prevents CDK7 kinase activity when associated to CAK complex in response to DNA damage, thus stopping cell cycle progression. Isoform 2 enhances the transactivation activity of isoform 1 from some but not all TP53-inducible promoters. Isoform 4 suppresses transactivation activity and impairs growth suppression mediated by isoform 1. Isoform 7 inhibits isoform 1-mediated apoptosis. Regulates the circadian clock by repressing CLOCK-ARNTL/BMAL1-mediated transcriptional activation of PER2.p53 (TP53) is a transcription factor whose protein levels and post-translational modification state alter in response to cellular stress (e.g. hypoxia, DNA and spindle damage). Activation of p53 occurs by several mechanisms including phosphorylation by ATM, ATR, Chk1 and MAPKs.