This antibody is not suitable for use in a Reverse Phase Protein Array format as described in SOP M-105. 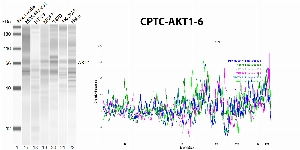 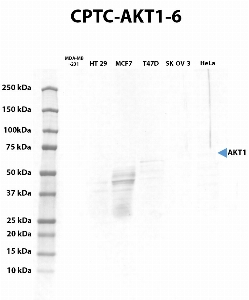 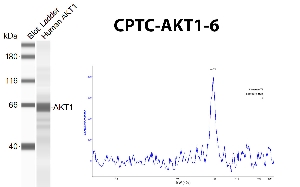 The serine-threonine protein kinase encoded by the AKT1 gene is catalytically inactive in serum-starved primary and immortalized fibroblasts. AKT1 and the related AKT2 are activated by platelet-derived growth factor. The activation is rapid and specific, and it is abrogated by mutations in the pleckstrin homology domain of AKT1. It was shown that the activation occurs through phosphatidylinositol 3-kinase. In the developing nervous system AKT is a critical mediator of growth factor-induced neuronal survival. Survival factors can suppress apoptosis in a transcription-independent manner by activating the serine/threonine kinase AKT1, which then phosphorylates and inactivates components of the apoptotic machinery. Mutations in this gene have been associated with the Proteus syndrome. Multiple alternatively spliced transcript variants have been found for this gene.

AKT1 (AKT Serine/Threonine Kinase 1) is a Protein Coding gene. Diseases associated with AKT1 include Proteus Syndrome, Somatic and Cowden Syndrome 6. Among its related pathways are PI-3K cascade-FGFR3 and GDNF-Family Ligands and Receptor Interactions. GO annotations related to this gene include identical protein binding and protein kinase activity. An important paralog of this gene is AKT3.

AKT1 is one of 3 closely related serine/threonine-protein kinases (AKT1, AKT2 and AKT3) called the AKT kinase, and which regulate many processes including metabolism, proliferation, cell survival, growth and angiogenesis. This is mediated through serine and/or threonine phosphorylation of a range of downstream substrates. Over 100 substrate candidates have been reported so far, but for most of them, no isoform specificity has been reported. AKT is responsible of the regulation of glucose uptake by mediating insulin-induced translocation of the SLC2A4/GLUT4 glucose transporter to the cell surface. Phosphorylation of PTPN1 at Ser-50 negatively modulates its phosphatase activity preventing dephosphorylation of the insulin receptor and the attenuation of insulin signaling. Phosphorylation of TBC1D4 triggers the binding of this effector to inhibitory 14-3-3 proteins, which is required for insulin-stimulated glucose transport. AKT regulates also the storage of glucose in the form of glycogen by phosphorylating GSK3A at Ser-21 and GSK3B at Ser-9, resulting in inhibition of its kinase activity. Phosphorylation of GSK3 isoforms by AKT is also thought to be one mechanism by which cell proliferation is driven. AKT regulates also cell survival via the phosphorylation of MAP3K5 (apoptosis signal-related kinase). Phosphorylation of Ser-83 decreases MAP3K5 kinase activity stimulated by oxidative stress and thereby prevents apoptosis. AKT mediates insulin-stimulated protein synthesis by phosphorylating TSC2 at Ser-939 and Thr-1462, thereby activating mTORC1 signaling and leading to both phosphorylation of 4E-BP1 and in activation of RPS6KB1. AKT is involved in the phosphorylation of members of the FOXO factors (Forkhead family of transcription factors), leading to binding of 14-3-3 proteins and cytoplasmic localization. In particular, FOXO1 is phosphorylated at Thr-24, Ser-256 and Ser-319. FOXO3 and FOXO4 are phosphorylated on equivalent sites. AKT has an important role in the regulation of NF-kappa-B-dependent gene transcription and positively regulates the activity of CREB1 (cyclic AMP (cAMP)-response element binding protein). The phosphorylation of CREB1 induces the binding of accessory proteins that are necessary for the transcription of pro-survival genes such as BCL2 and MCL1. AKT phosphorylates Ser-454 on ATP citrate lyase (ACLY), thereby potentially regulating ACLY activity and fatty acid synthesis. Activates the 3B isoform of cyclic nucleotide phosphodiesterase (PDE3B) via phosphorylation of Ser-273, resulting in reduced cyclic AMP levels and inhibition of lipolysis. Phosphorylates PIKFYVE on Ser-318, which results in increased PI(3)P-5 activity. The Rho GTPase-activating protein DLC1 is another substrate and its phosphorylation is implicated in the regulation cell proliferation and cell growth. AKT plays a role as key modulator of the AKT-mTOR signaling pathway controlling the tempo of the process of newborn neurons integration during adult neurogenesis, including correct neuron positioning, dendritic development and synapse formation. Signals downstream of phosphatidylinositol 3-kinase (PI(3)K) to mediate the effects of various growth factors such as platelet-derived growth factor (PDGF), epidermal growth factor (EGF), insulin and insulin-like growth factor I (IGF-I). AKT mediates the antiapoptotic effects of IGF-I. Essential for the SPATA13-mediated regulation of cell migration and adhesion assembly and disassembly. May be involved in the regulation of the placental development. Phosphorylates STK4/MST1 at Thr-120 and Thr-387 leading to inhibition of its: kinase activity, nuclear translocation, autophosphorylation and ability to phosphorylate FOXO3. Phosphorylates STK3/MST2 at Thr-117 and Thr-384 leading to inhibition of its: cleavage, kinase activity, autophosphorylation at Thr-180, binding to RASSF1 and nuclear translocation. Phosphorylates SRPK2 and enhances its kinase activity towards SRSF2 and ACIN1 and promotes its nuclear translocation. Phosphorylates RAF1 at Ser-259 and negatively regulates its activity. Phosphorylation of BAD stimulates its pro-apoptotic activity. Phosphorylates KAT6A at Thr-369 and this phosphorylation inhibits the interaction of KAT6A with PML and negatively regulates its acetylation activity towards p53/TP53.
AKT1-specific substrates have been recently identified, including palladin (PALLD), which phosphorylation modulates cytoskeletal organization and cell motility; prohibitin (PHB), playing an important role in cell metabolism and proliferation; and CDKN1A, for which phosphorylation at Thr-145 induces its release from CDK2 and cytoplasmic relocalization. These recent findings indicate that the AKT1 isoform has a more specific role in cell motility and proliferation. Phosphorylates CLK2 thereby controlling cell survival to ionizing radiation.