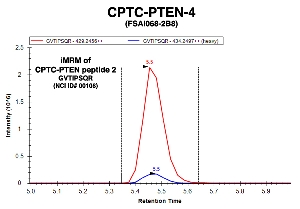 This gene was identified as a tumor suppressor that is mutated in a large number of cancers at high frequency. The protein encoded by this gene is a phosphatidylinositol-3,4,5-trisphosphate 3-phosphatase. It contains a tensin like domain as well as a catalytic domain similar to that of the dual specificity protein tyrosine phosphatases. Unlike most of the protein tyrosine phosphatases, this protein preferentially dephosphorylates phosphoinositide substrates. It negatively regulates intracellular levels of phosphatidylinositol-3,4,5-trisphosphate in cells and functions as a tumor suppressor by negatively regulating AKT/PKB signaling pathway. The use of a non-canonical (CUG) upstream initiation site produces a longer isoform that initiates translation with a leucine, and is thought to be preferentially associated with the mitochondrial inner membrane. This longer isoform may help regulate energy metabolism in the mitochondria. A pseudogene of this gene is found on chromosome 9. Alternative splicing and the use of multiple translation start codons results in multiple transcript variants encoding different isoforms.

PTEN (Phosphatase And Tensin Homolog) is a Protein Coding gene. Diseases associated with PTEN include squamous cell carcinoma, head and neck and cowden syndrome 1. Among its related pathways are PI3K-Akt signaling pathway and PI-3K cascade. GO annotations related to this gene include protein kinase binding and magnesium ion binding. An important paralog of this gene is TNS1.

Isoform alpha: Functional kinase, like isoform 1 it antagonizes the PI3K-AKT/PKB signaling pathway. Plays a role in mitochondrial energetic metabolism by promoting COX activity and ATP production, via collaboration with isoform 1 in increasing protein levels of PINK1