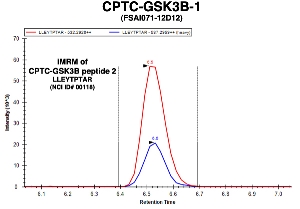 The protein encoded by this gene is a serine-threonine kinase, belonging to the glycogen synthase kinase subfamily. It is involved in energy metabolism, neuronal cell development, and body pattern formation. Polymorphisms in this gene have been implicated in modifying risk of Parkinson disease, and studies in mice show that overexpression of this gene may be relevant to the pathogenesis of Alzheimer disease. Alternatively spliced transcript variants encoding different isoforms have been found for this gene.

GSK3B (Glycogen Synthase Kinase 3 Beta) is a Protein Coding gene. Diseases associated with GSK3B include aneurysmal bone cysts and waardenburg's syndrome. Among its related pathways are PI3K-Akt signaling pathway and PI-3K cascade. GO annotations related to this gene include identical protein binding and protein kinase binding. An important paralog of this gene is GSK3A.

Glycogen synthase kinase 3 (GSK-3), a serine-threonine kinase with two isoforms (alpha and beta), was originally discovered as a key enzyme in glycogen metabolism. GSK-3 was subsequently shown to function in cell division, proliferation, motility and survival. GSK-3 plays a role in a number of pathological conditions including cancer and diabetes and is increasingly seen as an important component of neurological diseases. GSK-3 phosphorylates tau and presenilin-1, which are involved in the development of Alzheimer's disease. Both isoforms of GSK-3 are ubiquitously expressed, although particularly high levels of GSK-3beta are found in the brain where it is involved in synaptic plasticity, possibly via regulation of NMDA receptor trafficking. GSK-3 phosphorylates over 40 different substrates including signaling proteins, transcription factors and structural proteins, and is part of the signal transduction cascade of a large number of growth factors and cytokines. The activity of GSK is regulated by phosphorylation (Akt, S6K, RSK, PKA and PKC), dephosphorylation (PP1 and PP2A), and by binding to protein complexes (with beta-catenin, axin, CK1 and the APC complex).